​For media enquiries please contact Farming for Kids President, Charles Hill m.0428 658 149
​or view our Facebook page for updates.
<
>
Please see below for links to emails and newsletters
Courtesy of New England Living Magazine - Autumn 2018 Volume 11
The group drew inspiration from a similar project underway in Central Queensland. During an agricultural tour of the region in the early 2000s, Charles noticed a small school in the Emerald district had some impressive facilities for its size and got talking to the local farmers. It turned out the farmers had initially started cropping roadsides to raise money to fund the cost of keeping the school’s second teacher, but once that had been achieved the locals decided to keep the project running.
​
If such an initiative could work in Central Queensland, Charles reasoned, why wouldn’t something similar work at home? The support of a group of like-minded farmers was all that was needed, along with some suitable land. An area surrounding Quirindi Airport which offered up to 60 hectares was identified as suitable, and a lease agreement reached for the long-term project with Council.
“We look for where we can help in the community, that’s the Aussie tradition. It’s great to see the land surrounding the airport which was being underutilised, now producing an income that benefits children in the area,” says Charles.
​
Liaising with community groups, including Probus, the Country Women’s Association of NSW, Quota, Royal Far West and Lions, helps FFK better understand where their funds could make the most difference. For example, FFK worked with Rotary in early 2017 to assist Quirindi High School Year 12 student Wade Clarke attend the National Youth Science Forum in Canberra, as well as later provide scholarship funds towards the Joan Carpenter Music Awards. ​
The FFK website went live in late 2016, and Charles said this has helped spread the word about the group’s work promoting agriculture and community, and how the group can help. “The decisions about where the funds are directed are made with regard to our application guidelines, and now we have a few years of operation we’re starting to get a wider range of applications,” says Charles. “We place emphasis on projects with sustainability and longevity, and there needs to be drive and passion among those behind the projects. We want to provide assistance where it makes a real difference to a child’s life – and a difference that wouldn’t happen without that funding.”

While the group has helped individuals on a number of occasions, and in emergency situations, Charles said applications would be considered for any child in the area for any circumstance.  Since setting up the group, Charles said FFK members had learned of similar projects, either operating or having done so in the past, near Albury in southern NSW, as well as at Coonabarabran and Wee Waa in the north of the state. “This sort of project can easily be duplicated in other areas across Australia,” he says. “All you need to do is find suitable land. We started with overgrown land but have turned that around with time and effort.”

Local farmers and contractors donate time and labour for ground preparation work and sowing, while local businesses donate the necessary cropping inputs and a number of local agronomists donate their time and skills monitoring the annual crops.
​
FFK is sponsored by: Agracom Quirindi; Amps Quirindi and Tamworth; Pursehouse Rural Quirindi; Liverpool Plains Groundspray Quirindi; McKnight Signs Tamworth; Nurural Quirindi; RaboBank Tamworth; Forsyths Tamworth; and Pacific Seeds
Students from Years 4, 5 and 6 spend regular class time in the kitchen, which includes cooking lunch for the staff on Thursdays. “The school runs a breakfast club five days a week and most students use it, and this provides not only nutritional benefit but also social interaction,” says David. Children from Kindergarten to Year 3 are responsible for looking after the vegetable patch and chickens, assisted by a school ‘garden club’ of 15 to 20 students which helps out in the garden during lunch breaks.
YouTube - Regional Development Australia Northern Inland (RDANI) | 30 November 2017
“We are delighted to receive the award as our project may inspire other farmers in different areas to set up a charity based on our operations. Our overall objective is to benefit the health and well-being of children in our shire and we would like to thank all of our
supporters, sponsors and helpers, we couldn’t operate without you,” said the group’s President, Charles Hill.

The Northern Inland Innovations Awards are an annual awards program aimed at recognising and encouraging businesses, individuals and organisations, who are responsible for developing some of this nation’s leading innovative products and approaches across a broad range of industry sectors ... ​(extract from article by Sally Alden)

The Land |  20 April 2017 - ​Team of volunteers brings in charity crop - by Ruth Schwager
The image was stuck in Mr Hill's mind when he flew back to Quirindi.  "I was looking at the area around the airport and I remember thinking crops would be a good idea there."  Once the space around the airport – about 40 hectares – became available, a group of local farmers decided to take on the project.

​“We started as a handful of farmers, but we had about 20 people at the first big meeting, and now we’re up to about 30 members,” Mr Hill said.

The land is leased from the Liverpool Plains Shire Council, with Rabobank covering the cost of the lease.
​
All inputs – seed, fertiliser and chemical – are donated by businesses.  Pacific Seeds and Pioneer Seeds provide the seed, and Pursehouse Rural, NuRural and AMPS Commercial donate the chemical and fertiliser.  Peter Slade and Bruce Fulloon from Techspray and Bob Sipple from Liverpool Plains Ground Spraying looking after the spraying, and the marketing is handled by Agracom.  It also takes quite the team of volunteers – farmers and contractors – to plant and get the crop off.

The charity has donated more than $65,000 to schools, community groups and individuals in the Liverpool Plains Shire Council over the past three years.  Among the recipients are Wallabadah School, Quirindi Hospital Paediatric Ward, ​Quirindi Pre School, Eastside Day Care, Quirindi Basketball Club, the Anglican Church in Quirindi, Spring Ridge Primary School, Quirindi Junior Rugby Club and Quirindi High School.  Donations have ranged from $1900 for a barbecue and water bottles to $8000 for the establishment of an ongoing mental health first aid course at the local high school.
The charity also helped Quirindi High School year 12 student Wade Clarke attend the National Youth Science Forum (NYSF) in Canberra, with Farming for Kids donating $1500 towards his expenses to attend.
Quirindi Advocate  |  19 April 2017 - ​Farmers benefitting our kids 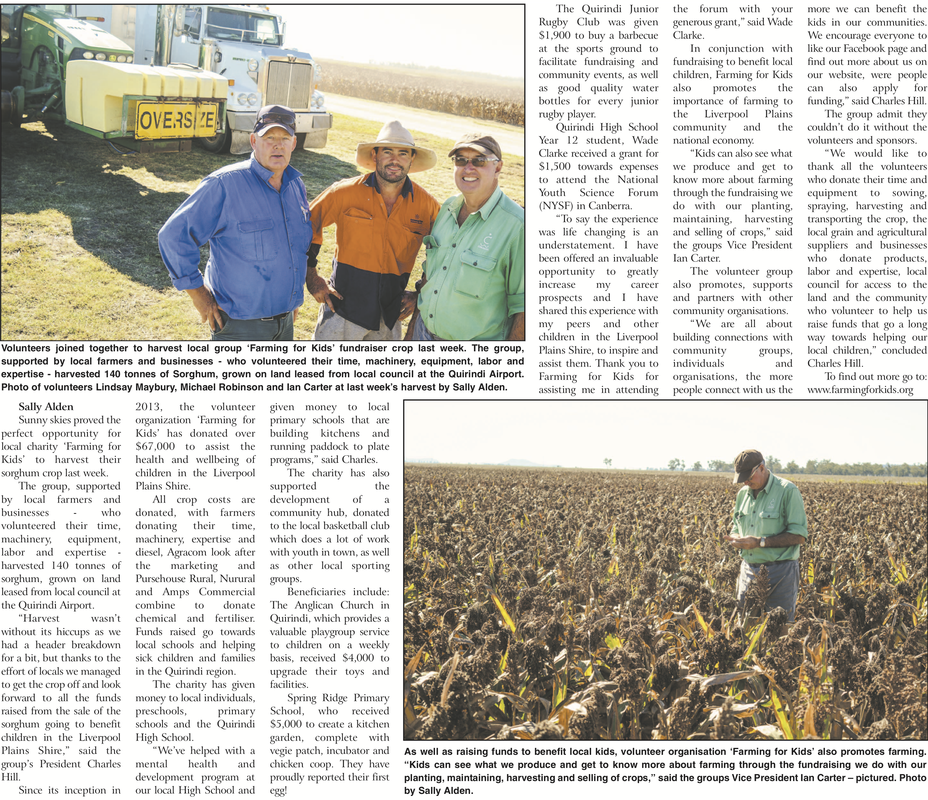 Last Thursday, producer Scott McInnes, volunteered his time, machinery and labour to sow a sorghum crop, which when harvested in May 2017 will raise funds for the charity.  Farming for Kids president Charles Hill, said on behalf of the group he would like to thank all the volunteers involved.

“Crop costs are donated, with farmers, like Scott McInnes and Mick Cudmore, donating their time, machinery, expertise and diesel, Agracom look after the crop marketing, and Pursehouse Rural, Nurural, Amps Commercial, Pacific Seeds, Wengfu Australia and Syngenta all combine to donate seeds, chemical and fertiliser.”
​
“We also have to thank Peter Slade and Bruce Fulloon from Spraytech and Bob Sipple from Liverpool Plains Ground Spraying for volunteering their time and resources to ensure the best outcome for the crop.”

Funds raised from the crops go towards local schools and helping sick children and families in Quirindi and surrounds.

The charity has given money to local individuals, preschools, primary schools in their local shire and to the Quirindi High School.

“We’ve helped with a mental health and development program at our local High School and given money to local primary schools who are building kitchens and running paddock to plate programs.”

In conjunction with fundraising for local children, Farming for Kids promotes the importance of farming to the Liverpool Plains community and the national economy, and supports and partners with other community organisations.

“We are just about to launch our new website, which will enable those in need to apply for funding online if they need, and it’s a way for people in our community to see what our charity is about and feel connected with us.”
Quirindi Advocate  |  27 January 2016 - ​Funding for kids 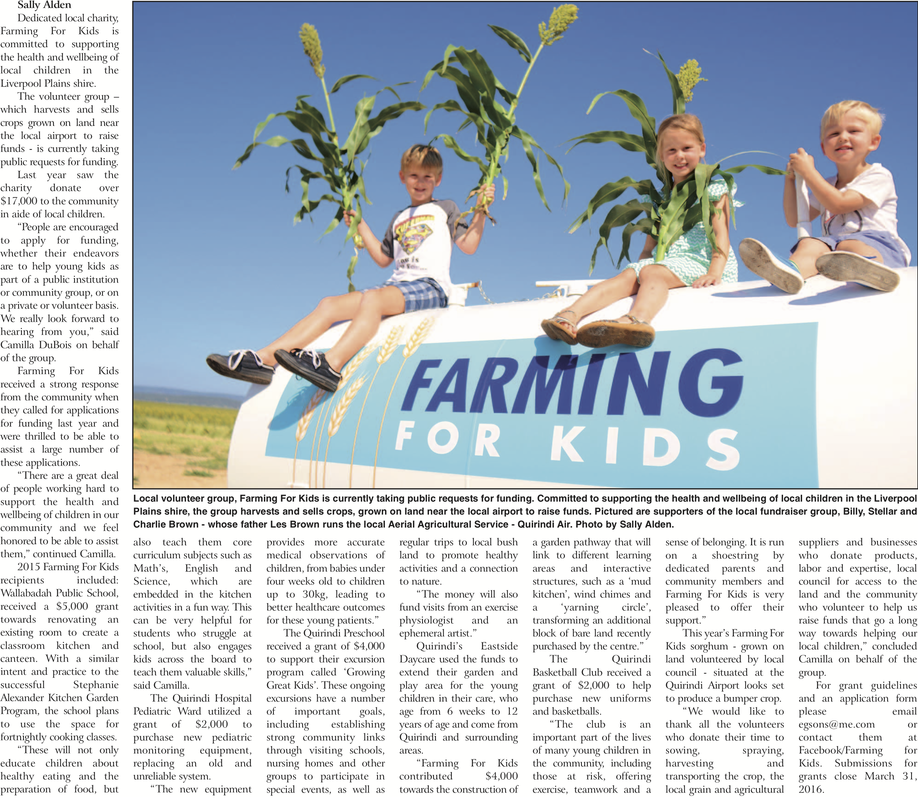 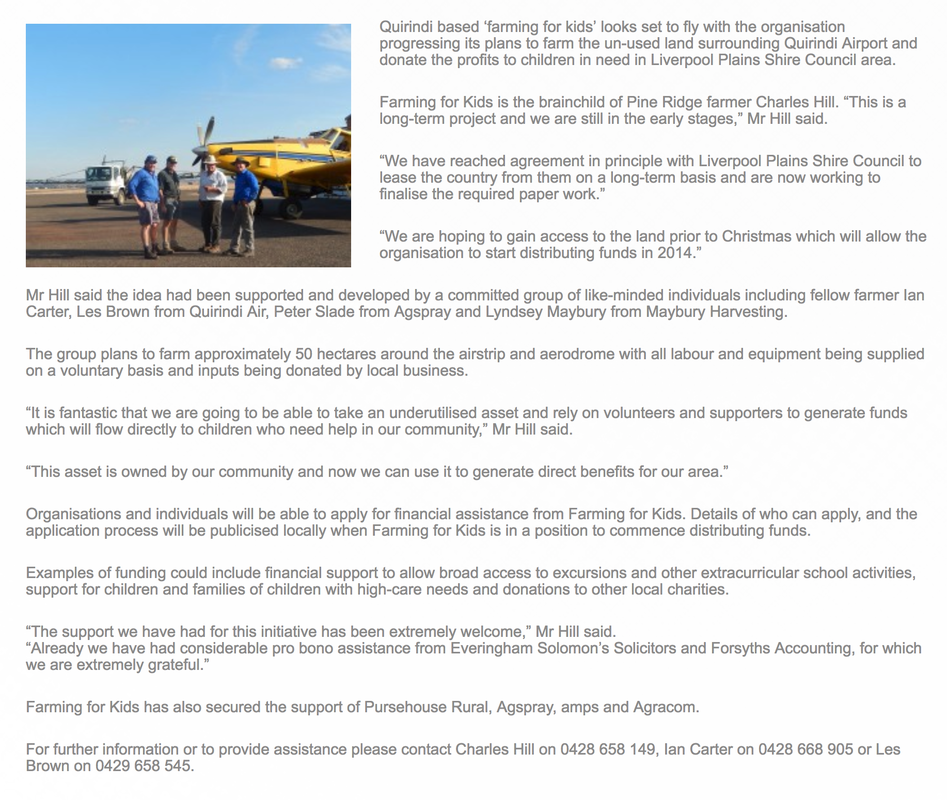